I thought it might be fun to play around with programmable microcontrollers, so I bought some to play with. One of the most popular chips right now is the ESP8266 which I first saw pop up on Hack-a-day in 2014. I had to search backwards through 47 pages of blog posts that have been made in the meantime — that might give you a sense of its popularity.

I played around with PIC16/PIC18s in the early 2000s but never actually made anything, but the interest has been there. It’s also been my long time desire to create an E-ink weather display (once again thanks to an old Hack-a-day post, this one from 2012. That’s how far behind on projects I am). Recently I noticed some inexpensive E-ink development boards on Aliexpress and decided to jump into a less shallow end of the pool. I had also been following the ESP8266 for Arduino repo on Github, so I vaguely knew where to begin. 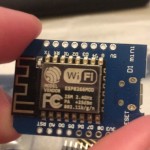 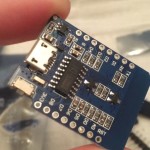 This evening I received the hardware (specifically, three of these) and decided to see if I could get a basic program deployed, just to get started. I don’t really know what I’m doing but I’m pretty good at reading & following directions (that counts for a lot in life).

1. Follow the “Installing with Boards Manager” directions here: https://github.com/esp8266/Arduino/ (which includes grabbing the latest Arduino IDE software, then pulling in the ESP8266 chip configuration, which includes the WeMos D1 mini board configuration.

2. From WeMos’ website, grab the driver for the on-board USB/programmer chip, which for me was the CH240G (https://wiki.wemos.cc/tutorials:get_started:get_started_in_arduino). Nothing more “exciting” than installing Chinese device driver software!

3. I got a little tripped up here, but later figured it out- when you plug one of the D1 boards into your PC via USB, it’ll show up as a COM Port in Device Manager. You have to pick that same COM Port in the Arduino IDE or it can’t find your board to deploy to. This was a little confusing because it won’t show up until you’re plugged in. 4. The Arduino IDE comes with the ability to load in example programs from the board configuration, loaded in Step 1. I wanted the simplest possible thing to make sure everything was working, so picked the “Hello World” of microcontroller programs: “Blink”, which toggles the power LED in an infinite loop.

So far, so good! All told, this took about an hour from opening the package to getting the light to blink (which includes scrounging around for a good USB cable and trying to get a in-focus pictures).

As you can see, I didn’t even bother to solder on the headers yet. I will do that, but I think next I will look into getting some wifi code up and running.