Alight, I haven’t posted in awhile and it’s time for an update about what’s going on. School’s out for the summer, so I’ll have time now to finish up Default Programs Editor v2 in the next couple weeks. In truth, it’s been pretty much done since the middle of April but it’s missing a couple features I want in before I lay this project to rest and move on to other things. Of course I’ll still welcome user feedback, and I expect there will probably be a spike in interest for the new version. Those new user experience reports may require some updates like I put out for v1.0. I’ve also been planning some additional internal refactoring of the library on which the program is based, as well as substantial documentation, so that I can finally publicly release the source and not be horribly embarrassed about it. 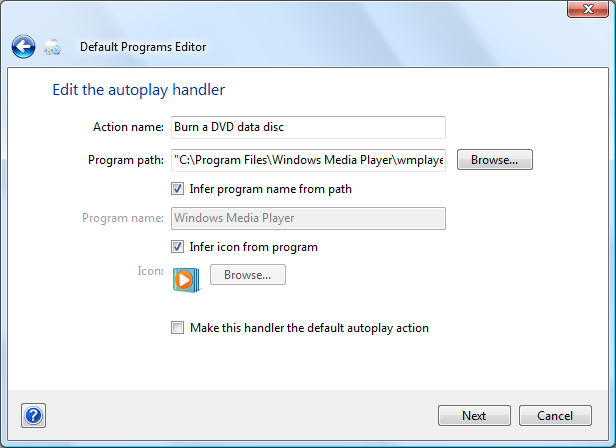 The high points of v2.0 include

Installation as a Control Panel applet, which means instant integration with Vista/Win7 start search
Hugely simplified UI which breaks down the complexity through the use of an Aero Wizard interface
Full Windows Vista and Windows 7 support (and limited legacy XP support as well)
New, dedicated website at http://defaultprogramseditor.com, which will launch along with v2.0 in a couple weeks

While I get work on that done, I’m also in the prep stages for possibly my next summer project, which will kick off with a short series of posts on the use of COM interop in C# to create an Aero compatible DeskBand UI. Stay tuned, it’s going to be a fun summer!